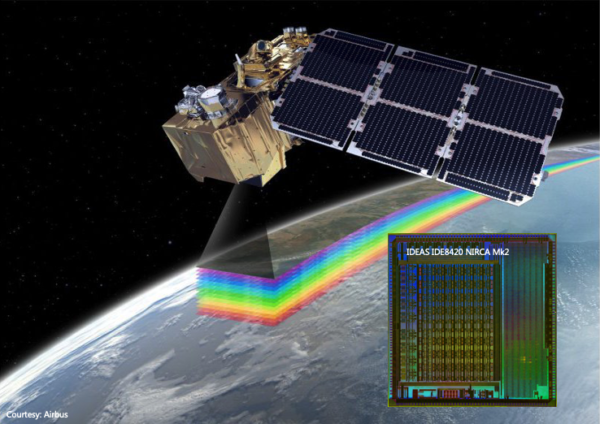 NIRCA MkII is an integrated circuit (ASIC) for reading out infrared focal plane arrays for Earth observation from space. The circuit helps reducing the size, weight and power of infrared sensor systems by integrating all necessary functions on a single chip. The 14-bit digitized sensor data is output on a 9×480-Mbps high-speed serial LVDS interface. The ASIC was developed under ESA contract for future Earth Observation missions.

The IDE8420 is a radiation tolerant control and acquisition integrated circuit (IC) for large area hybrid imaging focal plane arrays (FPA). It is designed for use in high speed, large area focal plane applications, making it particularly suitable for MCT or InSb based applications in Earth observation and security. It integrates the functionality that is usually found in discrete proximity electronics into one radiation tolerant SoC with operating temperature between -40°C and +85°C.

The IDE8420 includes 16 video channels, each with a 1x to 8x programmable gain amplifier (PGA) and a pipeline ADC with 14-bit and 16-bit output options running at 12 Msps. Analog input offset is adjustable in the analog domain with fine-tuning of gain and offset in the digital domain. Digitized sensor data is output on a 9×480-Mbps high-speed serial LVDS interface with 8b/10b encoding. The ASIC provides a digital interface (DIN/DOUT) for controlling the sensor, and analog reference voltages (AOUT) for biasing the sensor. IDE8420 is programmed via an SPI interface. After a program has been loaded into the internal ECC RAM the internal sequencer can execute a variety of tasks, e.g., waveform generation, ADC sampling control, configuration, and control of both internal analog and digital modules. Readout systems based on the IDE8420 which are supplied by IDEAS can include Camera Link and/or Gigabit Ethernet.